To believe or not to believe? That is the question!

Vaping has become increasingly more popular, especially when smokers are considering the transition over to vaping products. However, there is still a lot of information about vaping that many people are not aware of.

Following the publication of Public Health England’s latest update on the evidence of e-cigarettes, we thought the best time to talk about the myths of vaping is now. If you are considering vaping, the last thing we want is for you to get overwhelmed by the different information available, especially when some may be incorrect.

Naturally, like most things, many people hold opinions and misconceptions when it comes to things like vaping and the vaping products associated with them. In amongst all of the myths and wrong information, Smokey Joes want to put some of these myths to bed in hope that your decision to vape or not to vape is based on correct and factual information only.

Most discussions around vaping come from different sources and can be confusing or contradictive so that begs the question, who should you listen to? Our answer, the people in the know. Despite the sometimes confusing reporting on the myths associated with vaping, there is a growing consensus around the evidence and we’re going to dive a little deeper into this.

This is a term that you’ve probably come across before but may not have fully understood the connection to vaping and why this myth even came about.

A commonly held concern is that vaping might cause popcorn lung. This was due to an ingredient found in e-liquids in the past called diacetyl; at very high levels of exposure can be associated with serious lung diseases. However, if you’ve read our e-liquid juice guide for 2019, you will know that diacetyl is no longer an ingredient in e-liquids and is actually banned from all vaping products in the UK.

Many misconceptions even go as far as stating that E-cigs are not regulated and that we don’t know what’s in them. Sounds pretty crazy for something we’re inhaling! The UK actually has some of the strictest regulations in the world under the Tobacco and Related Products Regulations 2016. This means that all vaping products legally have to be subject to the minimum standards of quality and safety. All vapers and non-vapers can be made aware of what ingredients are found in e-liquids but to bury this myth for once and for all, all packaging and labelling are legally required to provide vapers with all the information they need to make informed decisions.

There have been a few cases where devices have exploded due to improper use or improper ways of charging and storing batteries. Though these are uncommon occurrences, they still happen and your vaping device should be treated like any other electrical item and be treated with care. There are many different types of devices, some that have built-in batteries or some that have external batteries. A selection of both can be found below to give you a rough idea of what you’re looking for.

Myth 3 – Vaping must be harmful as they contain nicotine

On average, there are far lower concentrations of unsafe chemicals in e-cigs compared to regular cigarettes. However, there are always different factors that need to be considered. Just like vaping products and vapers themselves, everyone is different. Naturally, if you choose an e-liquid flavour with a lower nicotine level; if any at all, then you will inhale less depending on how much you vape. Four out of 10 smokers and ex-smokers wrongly believe that nicotine causes most tobacco-related illnesses. However, although nicotine is the addicted substance and usually the reason why smokers transition to vaping, there are thousands of other chemicals found in traditional cigarettes that cause harm.

E-cigs and vaping products do not contain tar or carbon monoxide, two of the most harmful elements in tobacco smoke.  It does contain some chemicals also found in tobacco smoke, but at much lower levels.

This is a myth that we can understand as the evidence of being exposed to second-hand smoke from traditional cigarettes is harmful. However, we want to put your mind at ease that this is not the case when it comes to vaping. When the UK law prohibited smoking in enclosed places and workplaces, this was not transferred to vaping.

E-cigarette liquid is typically composed of nicotine, propylene glycol and/or glycerine, and flavourings. Unlike cigarettes, there is no side-stream vapour emitted by an e-cigarette into the atmosphere, just the exhaled aerosol. 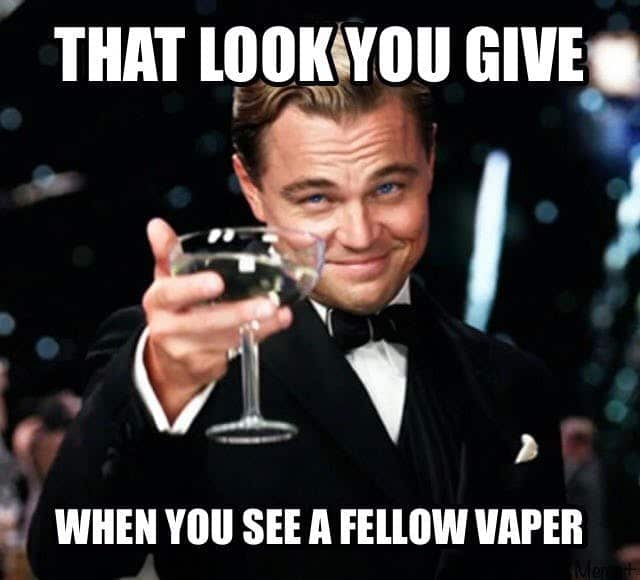 Myth 5 – Vaping is not cool

This one is a slightly biased one but vaping is definitely cool if it’s what you’re into. We can appreciate that you may have read a few myths in this article that may have lead to more questions. We live and breathe vaping (Excuse the pun), so if you do have any questions, we’re always on hand. The world of vaping is ever-changing and we would hate to think you’re put off due to myths and misconceptions, so feel free to get in touch. If you need a kick start into the vaping world, you can always read our starters guide to vaping.

Be mindful when and where you are vaping. Though there are no laws at present that state you cannot vape in certain places, individual organisations may have their own policies in place.